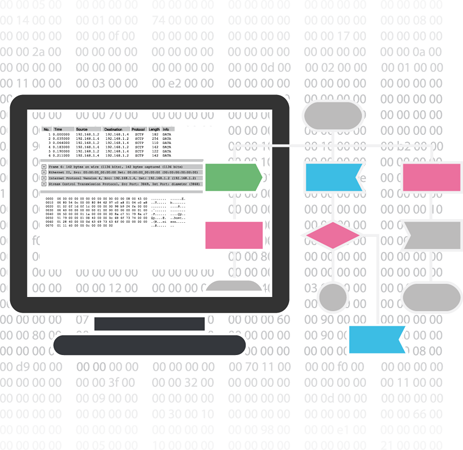 FlowCoder is a WISIWYG programming framework for prototyping, debugging, validation, fuzzing as well as functional, load, and security testing of computer networks. It allows building packets for a variety of network protocols, sending them on the wire, receiving and analyzing incoming network traffic, matching requests with replies, keeping and changing the state and much more.

What is FlowCoder good for?

Local Execution is the simplest case. All packets sent by FlowCoder originate on a local host. Packets coming back in response are processed there as well.

Only FlowCoder IDE components run locally. A Flowchart, once created, is shipped for execution to a Cloud running multiple instances of Flowchart processor engine. Packets are originated and processed in a Cloud. Local user gets back diagnostics and statistical data.

Playing MITM in a Cloud. Flowchart sees the packets passing between a pair of network end-points, and could modify them at any stack layer.

Pcap is a Template

Your Pcap file is your template. Import it into FlowCoder and get an executable Flowchart boilerplate right away. You'll be up and running in a few mins.

The incoming packets are delivered to Flowchart fully pre-parsed. The packet received or any part of it can be saved into a local or global variable for further use.

Change a packet field on the fly by assigning a new value to a field. Encoding is performed automatically before the packet hits the wire.

FlowCoder can play a role of a MITM Proxy. The passing through packets are decoded, modified at any layer and re-encoded on the fly.

One Flowchart works with any combination of stacks/protocols. If a particular protocol runs over UDP and TCP, the same Flowchart will work for both.

Running in a Cloud

FlowCoder Flowchart processor can run locally or in a Linux VM inside the Cloud. The latter allows for unlimited scalability.

One can start an RTP session, call a crypto function and much more via an API call from a Flowchart block.

Flowchart blocks can call external Python scripts. That way a Flowchart can use host OS services.

Frequently Asked Questions
What is a simple use case for FlowCoder?

Suppose you have a Pcap file with a record of a stateful packet exchange between two parties. You want to simulate party A and see how B reacts if you change the way party A behaves slightly or not so slightly. This includes altering logic of the state machine Party A follows, and/or altering the messages it sends. And you want to do it quickly and with zero coding involved.

What is the main advantage of FlowCoder?

FlowCoder visualizes and speeds up development of packet driven finite-state machines and requires no coding in many cases. One can start quickly by importing a Pcap file with the packet exchange of interest.

How FlowCoder compares to other packet generators?

Packet generators are often just Pcap file replayers. The best known example is tcpreplay. The fast ones usually are Intel DPDK based (CISCO T-Rex). Products of this category are either stateless, or support very simple states only (SYN/SYN ACK). Another category of the tools is targeted for testing networking state machines at application stack layers. Those systems are usually configured via a set of static GUI tables, have no or limited programmability and support for a limited set of protocols. Then there is Scapy. It's programmable, but one has to know Python from the get-go, slow (it's Python after all), with a very limited set of L4-L7 protocols supported.

FlowCoder is fully stateful, WYSIWYG programmable at any stack layer, fast (coded in C++), scalable, with a huge and growing library of supported L4-L7 and L2-L3 protocols. It allows on the fly editing of packets at any stack layer and importing of a Pcap file as a starting point of designing a networking state machine. No other networking product has a full stack packet editor as powerful as WireEdit.

What protocols are supported by FlowCoder today?

If you can decode the stack with WireEdit, it is supported by FlowCoder.

Do you translate Flowcharts into a scripting language?

No. We execute them directly. No scripting language is required.

At what stack layer can I build the state-machine?

Any layer from IP up, including binary encoded application layers.

Do I need to know Python?

Beginners and intermediate users are not. Scripting skills are useful for advanced data processing. Python will do. Perl as well. Even Javascript.

Do I have easy read/write access to packets' fields within a Flowchart?

Yes. You have full read/write access to *all* packet fields at *all* stack layers before pushing packets out to a wire, and when packets are received.

Can I save any field of a received packet into a variable?

Yes. An individual field, a whole PDU (networking stack layer data), or the whole packet. And you don't need to write any code to do that.

Can I run multiple flows in parallel on a single host?

Can I execute a Flowchart in a Cloud?

Yes. This is how the load is scaled.

Can I compose standard or malformed packets on the fly?

Yes and yes. You can do packet fuzzing on the fly.